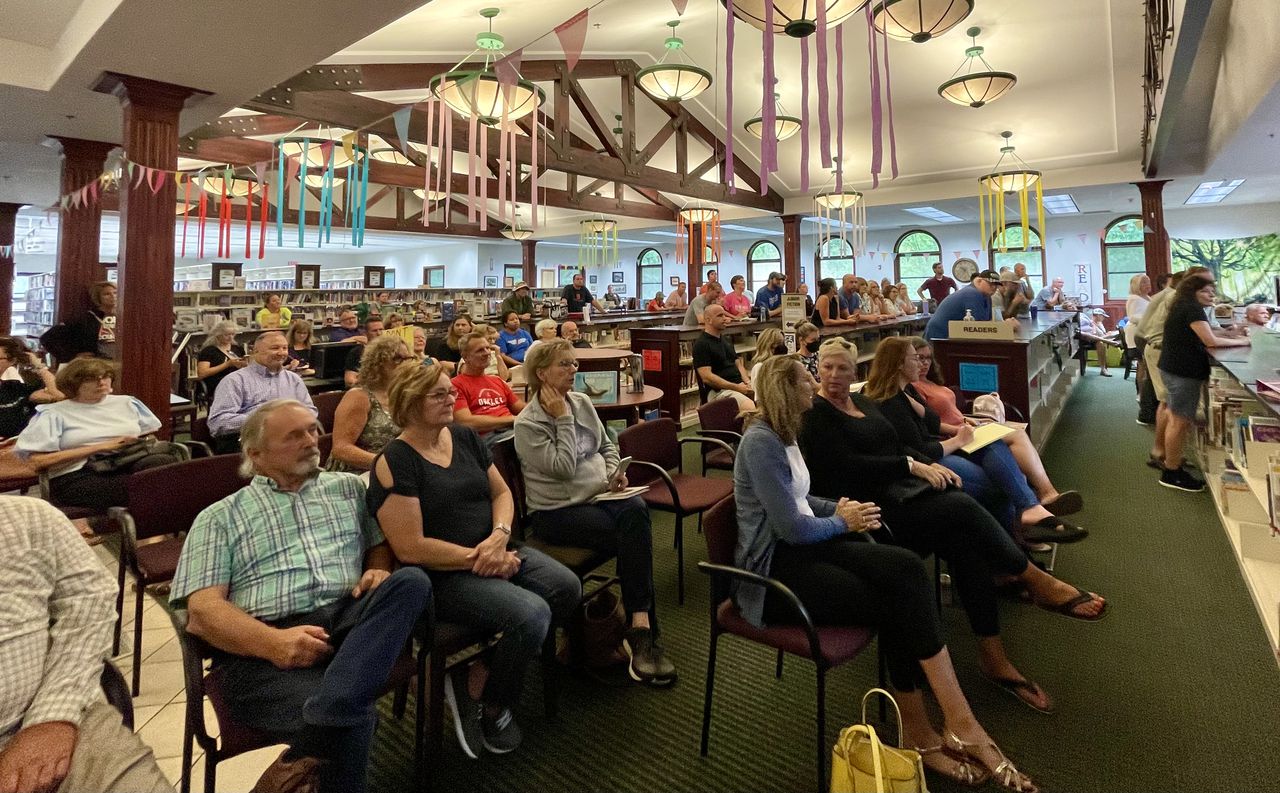 OTTAWA COUNTY, MI – A man, who objects to LGBTQ books being on the shelves of a West Michigan library, suggests the items could even be made available to patrons, but not exposed.

Another man, who supports keeping these LGBTQ-themed books available to patrons of the Patmos Library in Jamestown Township, Ottawa County, counters that West Michigan shouldn’t be a place who banned books.

These two men and several others, on both sides of the argument, heatedly exchanged opinions Monday night about the ongoing controversy surrounding LGBTQ books being held at the public library.

Those advocating for the preservation of LGBTQ books have said that a public library has the right and the obligation to provide information for everyone. Opponents said children should be protected from the open display of LGBTQ material.

The crowd of more than 50 people gathered inside the Patmos Library on August 8 for the scheduled meeting of the library board. Six days before, in the Aug. 2 election, Jamestown Township voters rejected renewing the library’s mileage and rose amid concerns about the library carrying LGBTQ materials.

The library board made the decision at the meeting to put the mileage proposal back to the voters. He should be on the November ballot.

During the public comment portion of the meeting, several residents — on either side of the issue — shared their thoughts, and in some cases their frustrations, with the council. However, they agreed that no one wanted the library to close.

Dean Smith said he’s not for book banning, censorship, or “anything else that undermines the First Amendment.”

“I don’t want overtly sexual material – gay or straight – or violent material either,” he said.

He suggested a compromise on materials — in this case, LGBTQ-related — that generate complaints from residents.

“(Books may) remain available, but not displayed,” he said. “Placed under a counter. Sheath. Next to the dumpster – whatever.

Across the aisle, Joe Spaulding began his three-minute talk by reading a book he grew to love, “Matilda.” He read a page from the book, placed it on the podium and looked at the audience.

Debbie Mikula, director of the Michigan Library Association, said there were 50 library mile proposals on August ballots across Michigan. Only five were rejected, but only one was due to the presence of LGBTQ books on the shelves, she said.

“We recognize that individuals have the right and responsibility to know what materials are right for them and their families,” she said. “But no one has the right to determine… what other families read.”

Speaking against LGBTQ books, Donna Rotman told the library board and the public that taxpayer dollars should never be spent on LGBTQ materials and made available to children in a library.

“The content of some books…contains graphic and sexual dialogue,” she said. “Obviously, if an adult read these books to a child, they would be prosecuted.”

The library is expected to lose 84% of its $245,000 annual budget with the mileage failure.