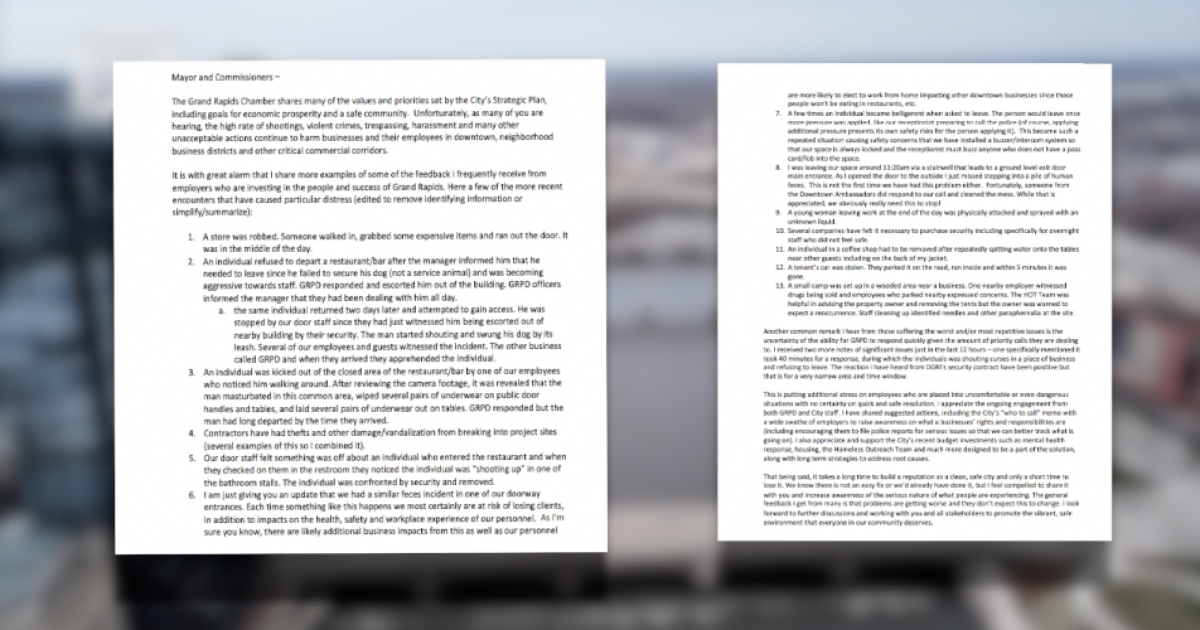 A large organization is sounding the alarm about crime in Grand Rapids.

FOX17 learns that the Grand Rapids Area Chamber of Commerce sent a letter to the city. In it, there is a list of serious and graphical issues.

Chamber’s Josh Lunger says the problems are only increasing.

He says he hears a lot about customers acting aggressively towards their employees. Lunger adds that the police take too long to react in some cases.

“This summer has been pretty tough,” Lunger told FOX17.

Lunger is Vice President of Government Affairs in the Grand Rapids Chamber.

“I don’t want to go into graphic detail, but it’s in the scale there. But it involves indecent behavior which, again, is just unacceptable. And it happens on a fairly regular basis,” said Lunch.

He sent this two-page letter. It contains more than a dozen complaints he says he’s heard from members in downtown Grand Rapids.

“We need everyone to understand what’s going on. And we need to be able to deal with it quickly,” he said.

One example, Lunger writes how a young woman was leaving work at the end of her day and was physically assaulted and doused with an unknown liquid.

He comments that the Grand Rapids Police Department’s response time is an issue.

“So what we see is 40 minutes, that’s what I’ve been told anecdotally from a bunch of calls to make it happen. And a lot of times they say the person who engaged in the behavior is already gone,” Lunger said. .

Lunger says he notices the number of violent crimes in the city is causing problems with the police.

“I don’t mean frustration because they don’t blame the department. And the department has been very helpful and engaging and has tried to resolve a couple of fairly late issues. But with all the violence going on, it’s kind of kind of stretched thin,” he says.

FOX17 has contacted the City regarding the issues raised in this letter. They sent us this statement.

The City is aware of the email and has been actively involved in addressing some of the downtown security issues over the past few months. Additionally, we have already committed to discussing public safety throughout July starting this Tuesday with a briefing on the recently completed National Community Inquiry and Agenda Items. related to police staffing and resources. This will be followed by an in-depth discussion on public safety at our meeting on July 26, when the Chief will share his observations and intentions to move service forward and improve public safety throughout the city so that all people are safe. safety and feel safe at all. time.

“I don’t want to point fingers at it, because I really appreciate some of the work that the city staff and the GRPD have done. But it’s if we don’t talk about it, then it’s not going to get better. “said Lunger.