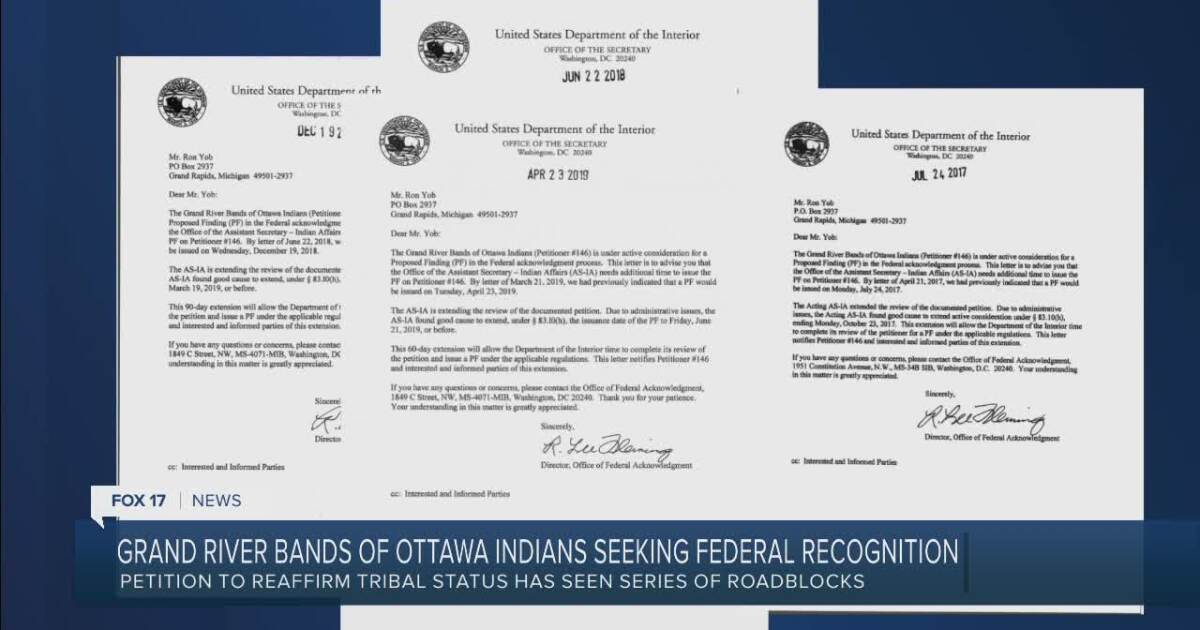 GRAND RAPIDS, Mich. — After a nearly three-decade-long battle, a western Michigan tribe may soon find out if they have won federal recognition.

The US Department of the Interior (DOI) is expected to issue a decision on the recognition of the Grand River Bands of Ottawa Indians by October 12.

The Grand River bands submitted a petition to reaffirm their tribal status in 1994.

The petition has been on the “active consideration” list since 2013, but has been blocked by a series of extensions requested by the DOI and the COVID-19 pandemic.

Federal recognition means that the US government considers a tribe’s right to exist as a sovereign nation. It also unlocks a number of benefits, including land, health care, and educational resources.

“It’s really hard to know that my dad, his mom…they never saw the benefits,” said Frances Compo, vice president of Grand River Bands. “I keep wondering if this is going to happen to me? To my children and grandchildren? Will they wait forever for something the government keeps postponing?

Comp added, “By being able to get those resources we would be able to help our people in a better way and I think that’s what I’m hoping for but it’s been so long and waited you’re almost scared to want.

Ogema Ron Yob says the history of Grand River dates back hundreds of years when 19 bands from Ottawa formed villages near waterways in southwestern Michigan.

Treaties signed in 1821 and 1837 recognize the tribe’s homelands. It is also recognized by the State of Michigan.

Yob says Grand River has lost about half of its membership due to the federal recognition process. When the original petition was submitted, there were over 1,000 members.

“A lot of people will have relatives who are from one tribe or another and they will choose the tribe that is recognized because then they can access funding,” Yob said.

According to Yob, it’s still unclear why the tribe hasn’t yet been recognized, although he suspects changes at the White House could play a part in the problem.

Documents on the DOI’s website show it has requested at least nine extensions since 2017. Each time, “administrative issues” were cited.

Another filing from 2005 suggested possible problems with the evidence given to officials, but Yob says those issues have been corrected.

Over the summer, Grand River released an affidavit from a longtime historian who was part of the DOI reconnaissance team. He says the tribe’s request was approved in 2016, but it has since remained with the department’s attorney’s office.

DOI did not respond to a request for comment.

It is possible that the DOI will extend Grand River’s request beyond October 12.

Yob says if she was rejected, they would have a chance to reapply.

However, he, Compo and other members hope it doesn’t come to that.

“We can start our evolutionary process, start improving,” Yob said. “We would start investigating ourselves and doing a needs assessment. We would start looking after the health of our people. We would start by looking at what training they have and what careers they want to pursue. We would just start elevating everyone.

There are currently six active petitions for federal recognition according to the DOI, including two from California that have also been trying since 1994.

Twelve tribes in Michigan have been recognized by the federal government.

A new BBQ spot is coming to Lansing