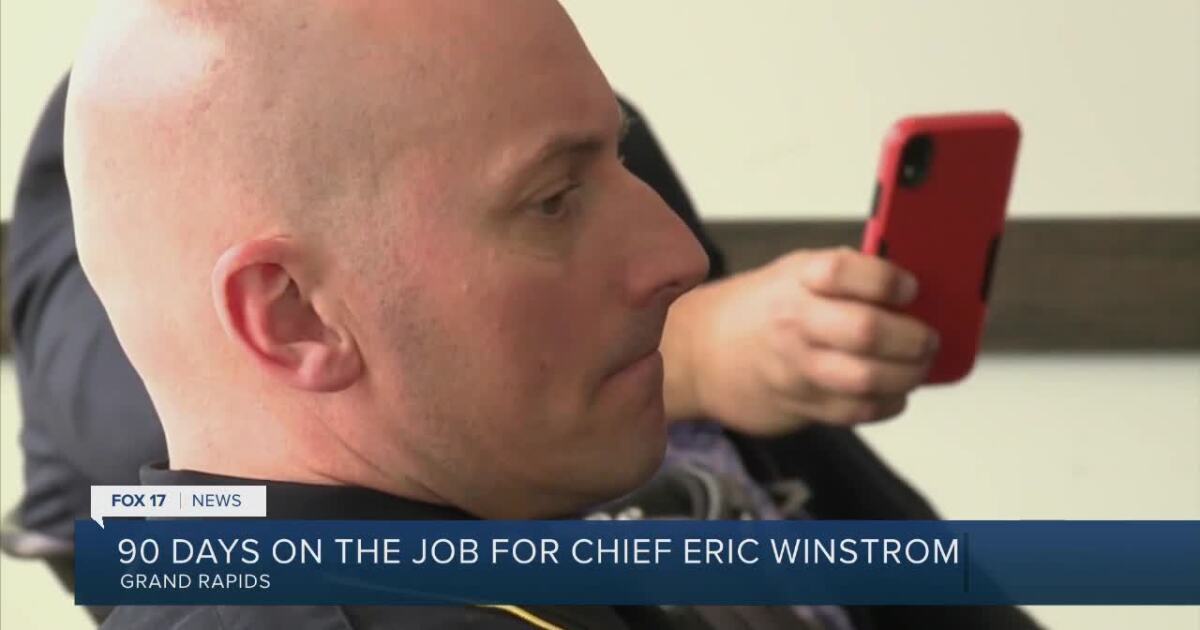 GRAND RAPIDS, Michigan — Even before Grand Rapids Police Chief Eric Winstrom was sworn in on March 7e this year, there was controversy.

In the search for a replacement for outgoing leader Eric Payne, several groups, including the local NAACP chapter, LINC Up and the Urban Core Collective, called on the city to reinvigorate the search and include more minority candidates.

Eventually, through the city’s vetting and hiring process, Winstrom – a white male – was cast in the role. There was no denying that as a law enforcement official, his years of experience with the Chicago Police Department spoke for themselves; he was an executive of the CPD leadership team and led the Area 5 Detective Division where he oversaw a team of 200 people, including 40 homicide detectives. He taught at the Chicago Police Academy, headed the citywide CPD Child Sex Crimes Investigation Unit, served as a supervising attorney in the Legal Affairs Division, and served as a supervised department policy and procedure for one year. He also came to Grand Rapids with a BS in administration of justice from Rutgers University and a Juris Doctor from Brooklyn Law School.

But in his first 90 days, Winstrom says he experienced the challenges of policing a community with a historic mistrust of his department.

Winstrom faced an uphill battle on the confidence front early on. He inherited a department marred by controversy; from the alarming interactions with black youth and a traffic study that showed black motorists were twice as likely as white motorists to be stopped by GRPD officers, to the department’s handling of protests related to the race in 2020 and several use-of-force events that led to city payments and policy reforms at the ministry.

Then, on April 4, just days into Winstrom’s tenure with the GRPD, Officer Christopher Schurr shot and killed Patrick Lyoya, a 26-year-old Congolese, during a routine traffic stop. The incident drew national attention and sparked a storm of anger and protests across the city, and marred Winstrom’s attempts to build trust in his first few weeks.

It will ultimately be up to Kent County prosecutor Chris Becker to bring charges against Ofc. Schurr, and until a decision is made, Winstrom has refrained from commenting on the shooting or the investigation.

Chief Winstrom said he came into office with a vision to reform the department’s use-of-force policy and plans to announce some of those changes next July 26.e City commission meetings, which he has been attending since arriving in Grand Rapids.

Last week, the commission approved a budget that saw funding for the GRPD cut by 4.4%. At the same time, the budget for the Office of Oversight and Public Accountability, which handles civilian oversight and handling complaints against the ministry, has more than doubled.

While the Civil Appeals Board can make recommendations on officer discipline, the police union’s contract with the city defaults to arbitration and gives the union immense power over disciplinary action. That contract is being renegotiated right now, and while Winstrom wouldn’t comment on any changes, he said the department is moving toward greater outside oversight.

“I spoke to the union about it,” he said. “They are fine with surveillance, whatever it is. They just want it to be fair.

The fiscal year 2023 budget offered a long-requested glimmer of change: co-response. Next year’s budget allocates $700,000 for trained mental health clinicians from the 180 Network to respond to mental health or addictions distress calls with agents — in some cases, only clinicians will go and agents won’t answer not at all to these calls.

“It makes a lot of people happy,” Winstrom said. “It also makes a lot of police happy, because the police will be the first to recognize that we may not necessarily be the right person to respond to the call of someone in mental health crisis.”

Following several mass shootings outside of Grand Rapids in its first 90 days, Chief Winstrom said the GRPD was prepared to handle a tragic incident like the one that unfolded in Buffalo in May, in Oklahoma and Wisconsin this week, and Uvalde, Texas which left 19 schoolchildren dead. The investigation into the police response to Uvalde is still ongoing, after officers waited nearly an hour before entering the building to confront the suspected shooter.

Facing the next uncertain 90 days that could see a charging decision in the Lyoya case, Winstrom is taking each day one at a time.

3 GOP candidates for Michigan governor will stay out of the ballot, under higher court rules