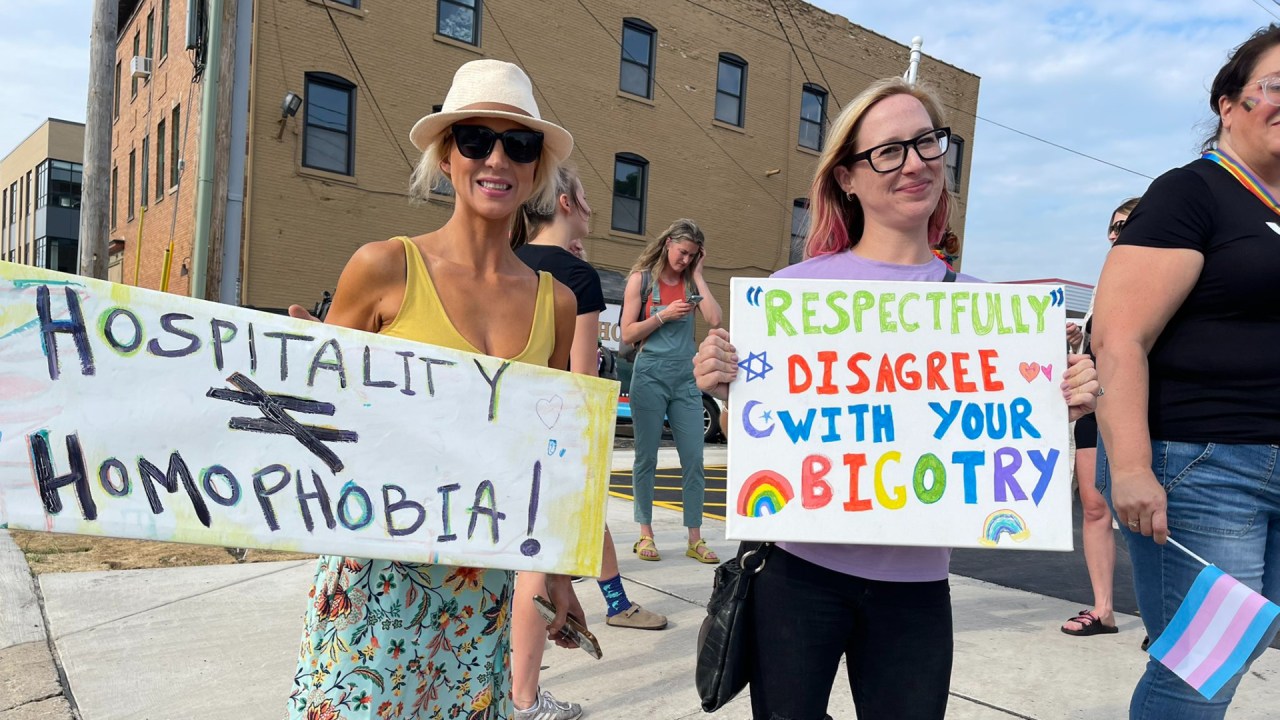 GRAND RAPIDS, Mich. (WOOD) — A new wedding venue on the west side of Grand Rapids is coming under fire after saying it won’t allow same-sex weddings.

The Broadway Avenue site opened its doors two weeks ago and celebrated its grand opening on Sunday evening. Owners Nick and Hannah Natale say they worked in the wedding industry for about eight years. Nick was executive chef while Hannah worked as a photographer. They say they have been working to open their own wedding venue since 2018.

“We feel like it’s a different vibe to other venues in the area. So we wanted to bring something new to the people of Grand Rapids and ultimately we love love,” Hannah said.

The owners say that about a week or two ago they began to receive fierce backlash after members of the community learned of their same-sex marriage policies. An Instagram post company has several hundred comments, many of which disagree with their policy.

“We believe that marriage is between a man and a woman. It’s our beliefs, what we grew up with and it’s how we run our home, how we run our marriage. So now that we’re opening a business, we’re going to keep it that way,” Hannah Natale said.

“I think we knew it would be a very controversial decision for us to run our business based on our faith and belief in God and what we believe marriage looks like through the Bible. The hardest part was the really nasty things we received: death threats, mean words towards our children, attacks on personal pages, other family members, friends,” Nick Natale added later. .

The two said the policy did not apply to wedding guests, employees or vendors. The couple also said people who want to get married at their venue don’t have to be Christians or believe in God. They went on to explain that they would also not allow marriages between transgender people because they believe marriage is between biological males and females. The owners say that despite the backlash they have received, they will not change their position.

“Our decision is not rooted in hatred towards the community. It’s just our belief about marriage,” Nick Natale said.

The controversial policy sparked a protest outside the company on Monday evening. About 20 people gathered on the sidewalk near the business in solidarity with the LGBT community, holding signs, pride flags and wearing rainbow-colored clothing.

“If you provide a public service, you must be open and inclusive. You can’t discriminate based on XYZ,” said Meghan Cytacki-Lewis, who helped organize the protest. “Some people might think it’s silly that we’re protesting over whether or not LGBTQIA+ couples can get married there, but it’s the start of something more. We’ve already seen huge setbacks in human rights: Roe v. Wade quashedour civil rights law.

Jessica Krebs, who also helped organize the protest, said it’s exclusionary things like this that they believe contribute to higher rates of suicide and mental health issues in the LGBTQ community.

“I’m so tired of having this conversation, of us trying to convince people of our value and worth as humans and our love or whatever. We were talking earlier about how it affects everyone, not just the LGBT community,” Krebs said.

Krebs said while she doesn’t think it’s likely, they want to see an anti-discrimination policy on the site. Krebs says that at the very least, the company needs to be transparent with a clearly written policy on its website that it doesn’t allow same-sex marriages. Krebs says that way customers can decide for themselves if they want to do business with the venue.

The Natales said they do not plan to reimburse couples who now wish to opt out of their venue contracts after hearing the owners’ views. They say they are considering posting their same-sex marriage policy but as far as they know they are not required to do so.

There is a similar case making its way through the Michigan Supreme Court. The case came after a wedding venue in Sturgis refused to serve a same-sex couple and a northern hair removal business refused to serve a transgender woman. Both companies argued it would interfere with their religious freedom rights, while the plaintiffs claim their civil rights were violated. The attorney general and attorneys for the company presented their closing arguments to the court in March.

News 8 asked owners of Broadway Avenue venues if they were concerned about legal challenges. They say they plan to take them as they come and have already consulted with a lawyer. The owners carried on with business as usual on Monday evening.