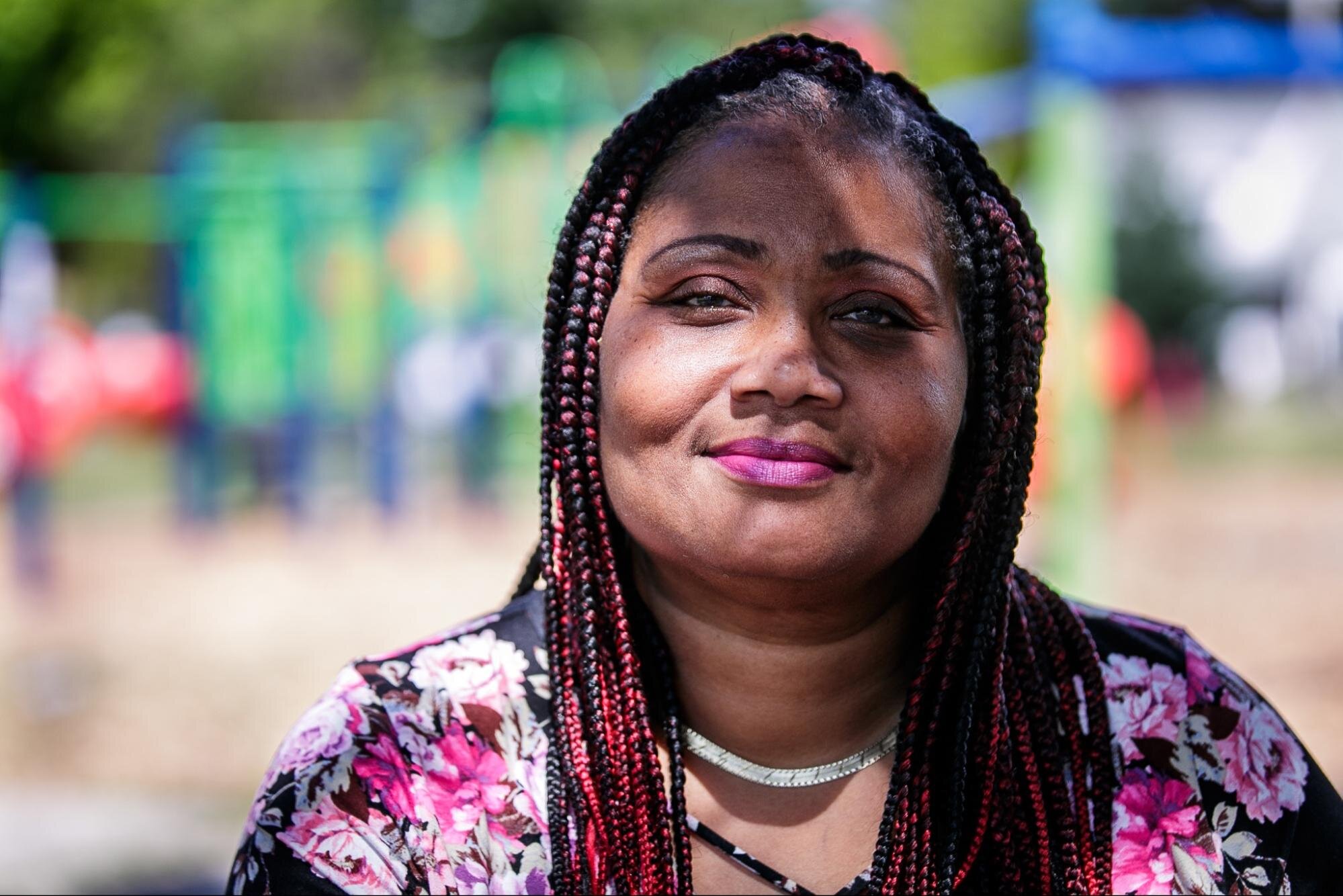 FLINT, Michigan — It all started with a bike brought into Honny Williams’ front yard, and soon there would be eight children’s bikes waiting for repairs by the neighborhood’s beloved “Sarvis Park Mom.”

“I bought a few inner tubes and fixed them all,” Williams said with a smile on her face. “I only encountered one that I couldn’t fix.”

Williams, a Flint native, moved to the 2nd Ward in 2018 and has since filled the streets of the neighborhood with her love for children, her community involvement and her commitment to positively impacting the future of Sarvis Park.

Any day of the week, Williams can be found in Sarvis Park, watching, listening and talking to children who come to play. She’s not afraid to ask the kids what they’re doing, what they need help with, and find ways to encourage them throughout the day.

“I like to be involved in positive things, you know, something that can inspire the next person,” Williams said.

Honny Williams sits on a park bench while talking to neighborhood kids (pictured L-R; Terynn Henry, Sakara Johnsonn, Nene, Miesia Leroy, Nikiyah Johnson) in Sarvis Park, Flint on July 26, 2022. (Jenifer Veloso | Flintside.com)Over the years, Williams has witnessed an increase in systemic issues that have created more crime and a lack of public transportation preventing the development and growth of the 2nd Ward. Determined to change course, she joins the Sarvis Park Neighborhood Association.

“Participate, lend just an hour,” Williams said. “If everyone gave an hour of their time per person in each department, something will happen. I can’t do much, but I don’t mind going where I can.

Not only does Williams believe that participation is the key to having a successful neighborhood, but she opened the doors to her business, Sunny’s Place, two years ago. The business is located on Clio Road where it offers pedicure and notary services by appointment.

A small business owner and mother of five, Williams leads her community with a strong maternal understanding of the world around her.

Three years ago, her son was killed in a fatal car accident.

“You get away with it. Every day is a challenge,” Williams said. “Some days are better than others. Some days I miss him more than the day before. So today he might be more on my mind than he was.

It was by giving her son his first pedicure that she led her to becoming a licensed nail technician, and it’s the words her son said to her that keep her invested in the world around her.

“Be careful mum, that’s what my son always told me,” she said.

And that’s exactly what Williams does. She watches, pays attention and lets the children in her community know that she really cares. “I remind them, we don’t have bad days, we have bad times. It’ll be fine, give it an hour. I bet things turn around, just breathe. I also have my moments.

Honny Williams sits on a park bench while talking to neighborhood kids (pictured L-R; Terynn Henry, Sakara Johnsonn, Nene, Miesia Leroy, Nikiyah Johnson) in Sarvis Park, Flint on July 26, 2022. (Jenifer Veloso|Flintside.com)Williams believes in the power of participation, attention and the presence of other people who care. One of his favorite moments of being involved was watching the police pull up to the basketball court and play ball with the neighborhood kids.

“It’s safer because everyone participates. The more people watching things, the less crime there is,” she said.

The future of Sarvis Park is bright not only in the eyes of its leaders but in the heart of Williams. She dreams of city neighborhood soccer teams with different age groups playing against each other during the summer. She loves watching the community garden grow. And on Saturday mornings, she likes to sit on the bright red bench in the park, watch yoga in the park, and enjoy the beautiful moments in her favorite park.

“Whether you live in this room or not, just come hang out with us,” Williams said. “Start on Saturday. Come and do yoga here. Everyone is welcome.

Learn more about our On The Ground series on Sarvis Park:

What will Gehrig Normand bring to East Lansing?