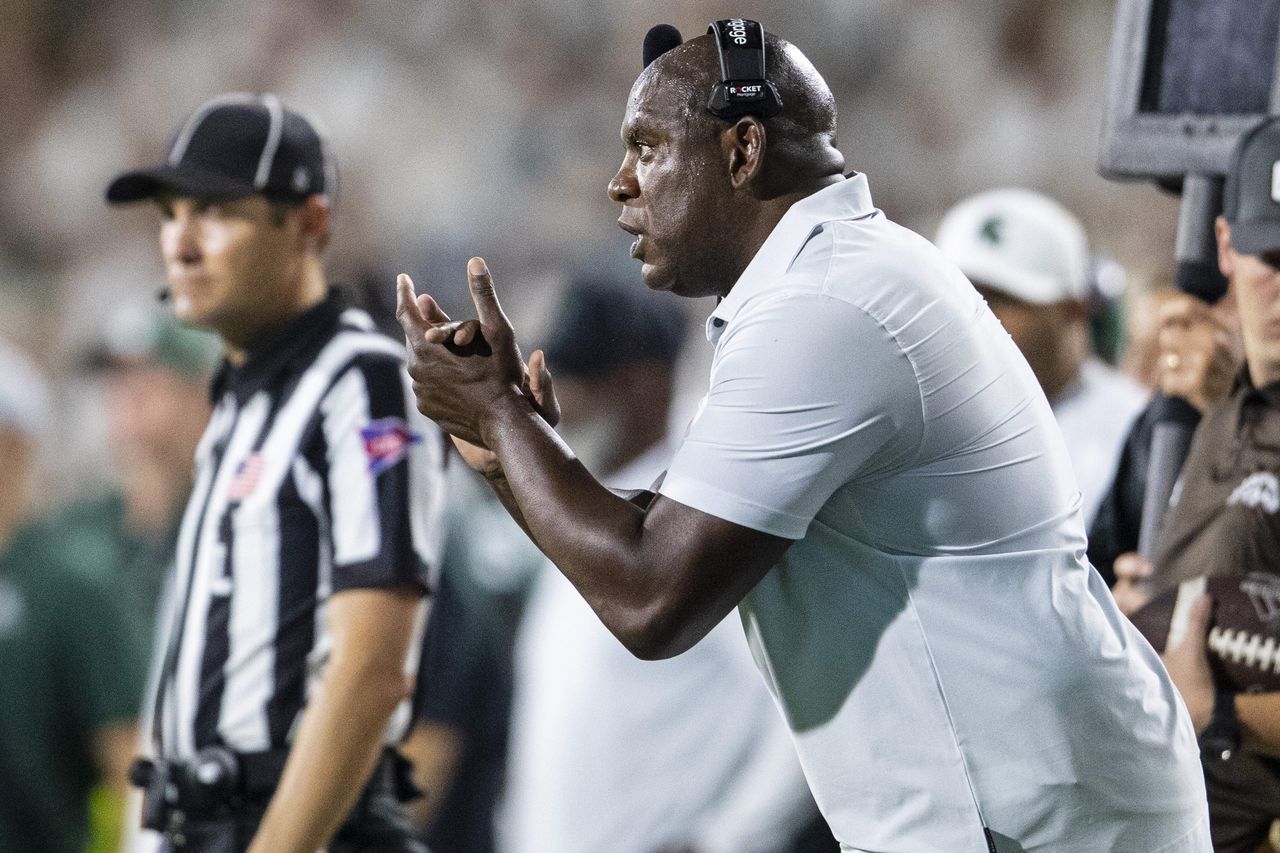 EAST LANSING — Three days after opening the season with a home win, Mel Tucker has had plenty of time to rewatch the movie.

And the Michigan State coach wasn’t happy with the team’s performance in Friday’s 35-13 win over Western Michigan.

“We’re just too inconsistent right now with what we’re doing,” Tucker said Monday. “Even though there were some good things we saw there, that I saw there on the tape, our overall game was unacceptable.”

No. 15 Michigan State went three times on its first two possessions and Western Michigan built up and led 3-0 early. The Spartans followed with three straight touchdowns as quarterback Payton Thorne connected with a trio of different targets for an 18-point halftime advantage. However, Western Michigan cut the deficit to eight points by the end of the third quarter. After five consecutive scoreless possessions, Michigan State scored two touchdowns in less than three minutes to tie the game late in the fourth quarter.

“We’re just challenging everyone in the organization to get comfortable and attack this week and we need to take our intensity to the next level,” Tucker said. “We have to prepare to play 60 minutes this week – not 10 or 20 or play in spurts. We just need to increase our intensity level of what we’re doing. We must attack everything we do.

“When we went up 21-3, it’s an opportunity for us to run more, play harder, play faster, hit harder, fewer mistakes, be a good assignment, and we We haven’t done it. We can’t be seduced by any measure of success that we have. When you go up 21-3 and you don’t keep up the momentum and you do certain things, that’s a problem. We let’s take it up with our players, as coaches it starts with me and the staff and we have to communicate to the players how we’re fixing things.

Tucker saw a few players with their hands on their hips during the game, which he said “makes no sense.” He called the cramping players at East Lansing in September “unacceptable” and said it was his job to make sure they were hydrated.

There are plenty of improvements Tucker is looking to make after the season opener and ahead of Saturday’s game (4 p.m. BTN) against Akron (1-0) at East Lansing.

Michigan State is advancing without a key member of its defense as starting linebacker Darius Snow suffered a season-ending injury against the Broncos, Tucker said. It’s also unclear when starting safety Xavier Henderson will be available after an apparent right leg injury in Game 1. This only increases the need to have other people ready to replace him.

“The opponent finds these guys on the court,” Tucker said. “They snoop around and find your weaknesses and exploit them. You can only be as strong as your weakest link, so we can’t have weak links.

Despite injuries to two defensive leaders, the Spartans had positives to take from the opener. Defensive end/linebacker Jacoby Windmon, an off-season transfer from UNLV, had seven tackles, four sacks, and a forced fumble and was named the Walter Camp Football Foundation National Defensive Player of the Week. Jalen Berger, a running back transferred from Wisconsin, had 16 carries for a career-high 120 yards and a touchdown.

Quarterback Payton Thorne threw four touchdown passes but said he was disappointed with his performance after completing just 12 of 24 passes for 233 yards with one interception.

“I thought Payton did some good things in the game,” Tucker said. “It doesn’t surprise me when he comes here right after the game and says he was disappointed with his performance because he’s a perfectionist. That’s how he is. It’s never good enough.

The Spartans are coming off an 11-2 season and have Big Ten championship and national title goals. Tucker pushes the team to maximize their potential.

“I’m in love with this team, I love this football team,” he said. “This team is a special group of guys. This is why we cannot afford not to raise the level of our intensity this week in everything we do and in every detail. … We just can’t afford to leave anything on the table. We have unrealized potential that we need to tap into and achieve productivity consistently, like immediately.