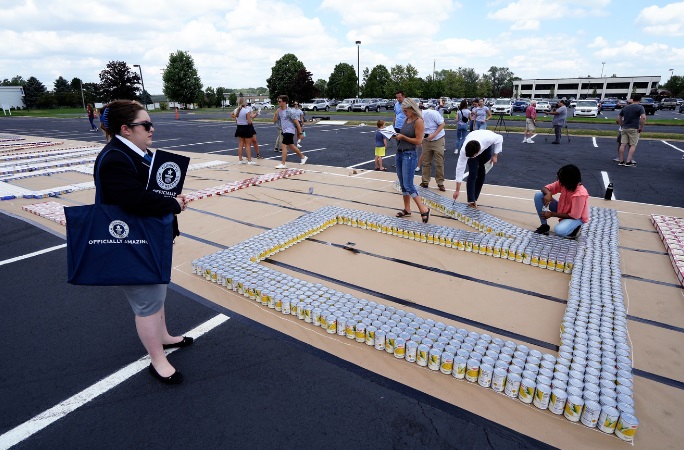 A West Michigan-based grocery chain has broken a world record while giving back to its community in a big way.

A group of 24 interns and a handful of SpartanNash employees constructed the world’s largest word out of packaged food in July 2022, using 5,791 items, according to Guinness World Records in a press release announcing the victory Wednesday.

They spelled SpartanNash using things like canned corn, fruit cocktail, and canned pasta. The record word laid out in the parking lot of the company’s Grand Rapids headquarters was 150 feet long and 16 feet deep, Guinness World Records said in the statement. The organization added that a referee from Guinness World Records was on hand to verify the world record attempt.

“It was amazing to see all the work that went into developing a cohesive plan to break the record,” SpartanNash intern Medina Vila said in the statement. “Everyone who helped played an important role in the success of this project. We did more than just break a record – we developed organizational and communication skills while setting world records.”

After setting the world record, the company donated all proceeds used in the attempt to a local nonprofit called Buist Community Assistance Center. The non-profit organization, run largely by volunteers, provides food, clothing and personal care products to members of its community in need.

“This was an incredible opportunity for the SpartanNash interns to gain experience coordinating a big goal as a team,” Andy Clausen, SpartanNash vice president of national accounts, said in the statement. “We planned this to allow our trainees to have something that sets them apart – not many people have a Guinness World Records title on their CV.”

According to Guinness World Records, the record to break was a word made up of 1,111 products, but the first letter of the SpartanNash team alone contained more than that number of parts. The previous record was set by Freefrom Foods International Association in Hong Kong, China in 2018.

“Interns came together to create solutions, have fun, and serve our community – a great example of our core behaviors in action,” Clausen added in the statement.