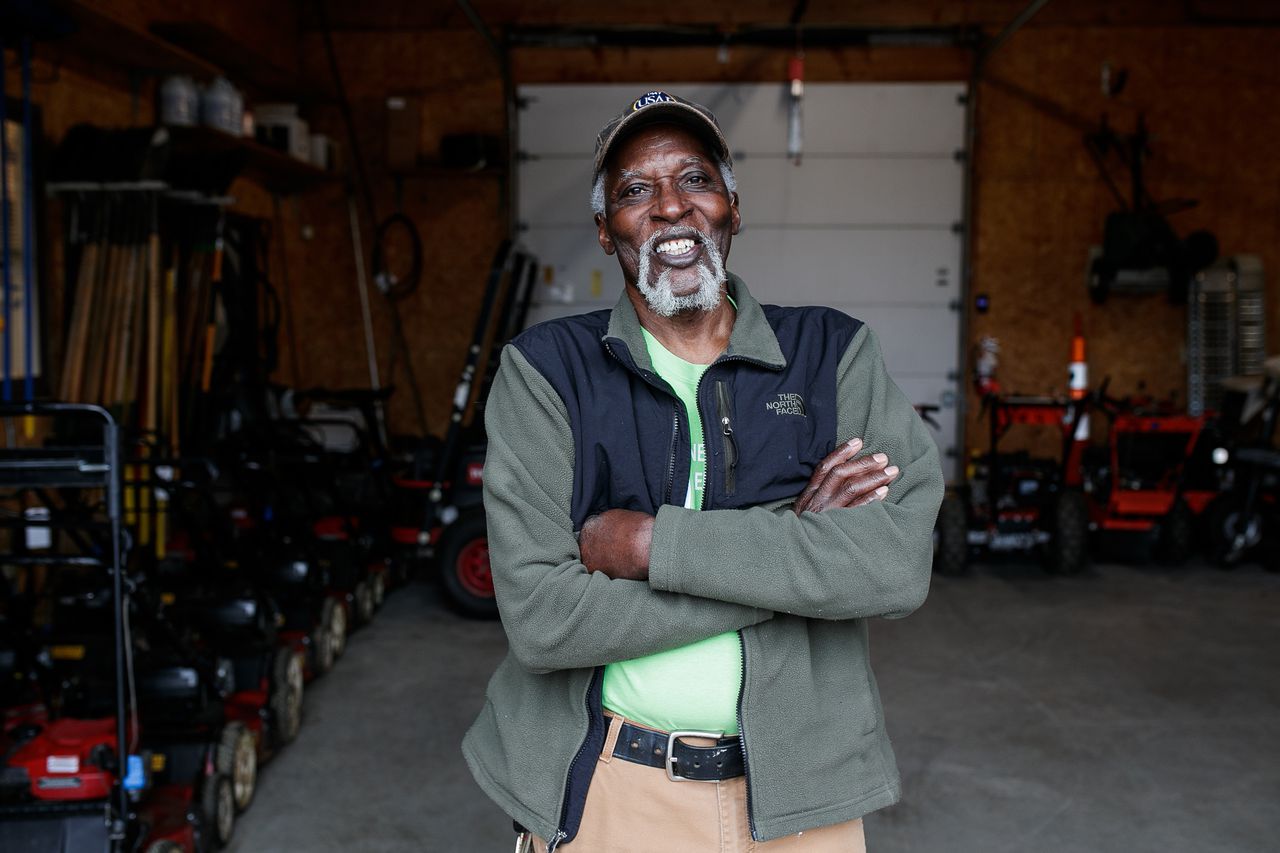 FLINT, MI – At the corner of Martin Luther King Avenue and Dewey Streets is the Neighborhood Engagement Hub Tool Shed.

Each tool rests in its cut-out location, aligned side-by-side so that each item is easily recognized and found.

From zero-turn mowers to hedge trimmers, rakes, and shovels, longtime Flint resident Hurbert Pitts has every tool labeled, numbered, and cataloged in an inventory so Flint residents can borrow, use, and return tools. tools to help maintain their city.

“I attribute that to Uncle Sam,” said Pitts, a U.S. Air Force veteran. “In the army, they are organized. When I leave work, the next guy can come in and he can take over. So now, when I come in the morning, I can tell right away if I’m missing any items.

Once the tools are borrowed, Pitts and his fellow tool shed keeper check the daily maintenance of the equipment to make sure each item is ready for the next borrower.

Pitts’ smile is warm and welcoming, and he’s become a fixture in the neighborhood providing accessibility to equipment to help residents of city neighborhoods maintain homes, community centers and vacant lots.

His empathy and kindness stem from a lifelong determination to not be the status quo and to beat what the system intended for him.

After serving four years in the Air Force, Pitts returned to Flint with two options: get a job at the store or return to Hamady Brothers, a grocery store in the Flint-based supermarket chain.

In 1973, Pitts returned to his old position at Hamady Brothers with six years’ tenure.

Pitts was making $10.50 an hour in 1987, and Hamady began demanding concessions from his employees, saying the company was in financial trouble. A few years later, Pitts would be making $7 an hour.

Hamady Brothers union members went on strike the same year he returned to the store and soon owner Alex Dandy would be caught embezzling money from the business.

“We never got that back. I had to get back to work and the max I made was $8 an hour,” Pitts said. “When we finally went on strike, that’s when Hamady dissolved. After that, I worked security at Flint Osteopathic Hospital for a while.

Pitts’ life continued to become increasingly difficult and he soon began to find his way on the streets.

“Now when I say that I was on the streets, you can understand I was into drugs. You know, I was divorced and had three kids. My wife came back when I was in the street and she took care of the kids,” he said. “I was on the streets until 1996, for about five or six years. I ended up in jail and went through that system prison.

Pitts’ entry into the prison system became one of the defining moments of his life.

“One of the most eye-opening experiences I’ve ever had was when the judge said to me, he said, ‘I’m tired of seeing you here,’ because you know, a lot of people going into prison, they go in and out, in and out, it becomes a spinning wheel,” Pitts said.

The judge promised Pitts that he would convict him as a repeat offender. He was then sent to prison in Jackson.

When Pitts arrived at the Jackson facility, he noticed other men had letters labeled at the end of their names.

“I asked them, I said, ‘What is the letter for? “, Pitts said. “Because you know, because I just got a number. They said, ‘Well, the letters are for every time you come back to Jackson, you get the same number, but a different letter.

“I said, this guy has an L, I see J, K, L all the way up there. And he said, ‘Yeah, they keep coming back and he said, ‘This is what’s going to happen to you ‘. So next time you come here you’ll get an A in front of your number. I didn’t want that. So I went through Jackson and from Jackson they sent me to Saginaw for 30 days. Then they sent me to Saginaw. sent to the YMCA because I’m first level, you know, I’m not a criminal, I’m not hardcore level yet, you know?

After Pitts transferred to Saginaw, he was placed in the YMCA program where he was transported to work in a factory, a job he got through a temp service in Lapeer. In the evening, he went back to sleep at the YMCA.

Her work through the temp agency eventually led to more employment and life stability. Pitts was able to buy a vehicle and continue to work for the same factory in Lapeer after serving his sentence.

In 2010, the factory closed and Pitts found his way to AmeriCorps, which led to his employment at the Neighborhood Engagement Hub tool shed.

He became a loving and supportive member of the community, going beyond the tool shed.

More recently, he was humbly nominated by members of the community to participate in the Flint Institute of Arts Special Exhibit, “Son: Seeing the Modern African-American Male.”

Entering the FIA, the stunning, larger-than-life black-and-white portrait of Pitts, by artist Jerry Taliaferro, was the warm gaze that greeted anyone entering the exhibit.

“It was overwhelming,” Pitts said of his participation in the exhibit. “I saw this young woman, with children standing there [in front of his portrait]. They took a picture with it. So I went up there and said, ‘Hey, do you know that guy right there?’ And they said no. I said, ‘Now you do.’

To listen to Pitts’ audio in the exhibit, click here.

Pitts remembers the wonderful moment and still has a photo on his phone of his wife Cora, 72, whom he remarried, taking a selfie in front of Pitts’ portrait inside the FIA.

He is one of many strong and driven black men who created Flint’s bedrock.

“My hope for the future is that it can continue,” Pitts said. “I’m not the end, I’m just the keeper until someone comes because you don’t want it to end. You know, I want someone who is going to have the same or similar passion for this tool shed. They’re not going to be like me, but I hope they have something in them that’s going to make them like it and want to see people using these tools.