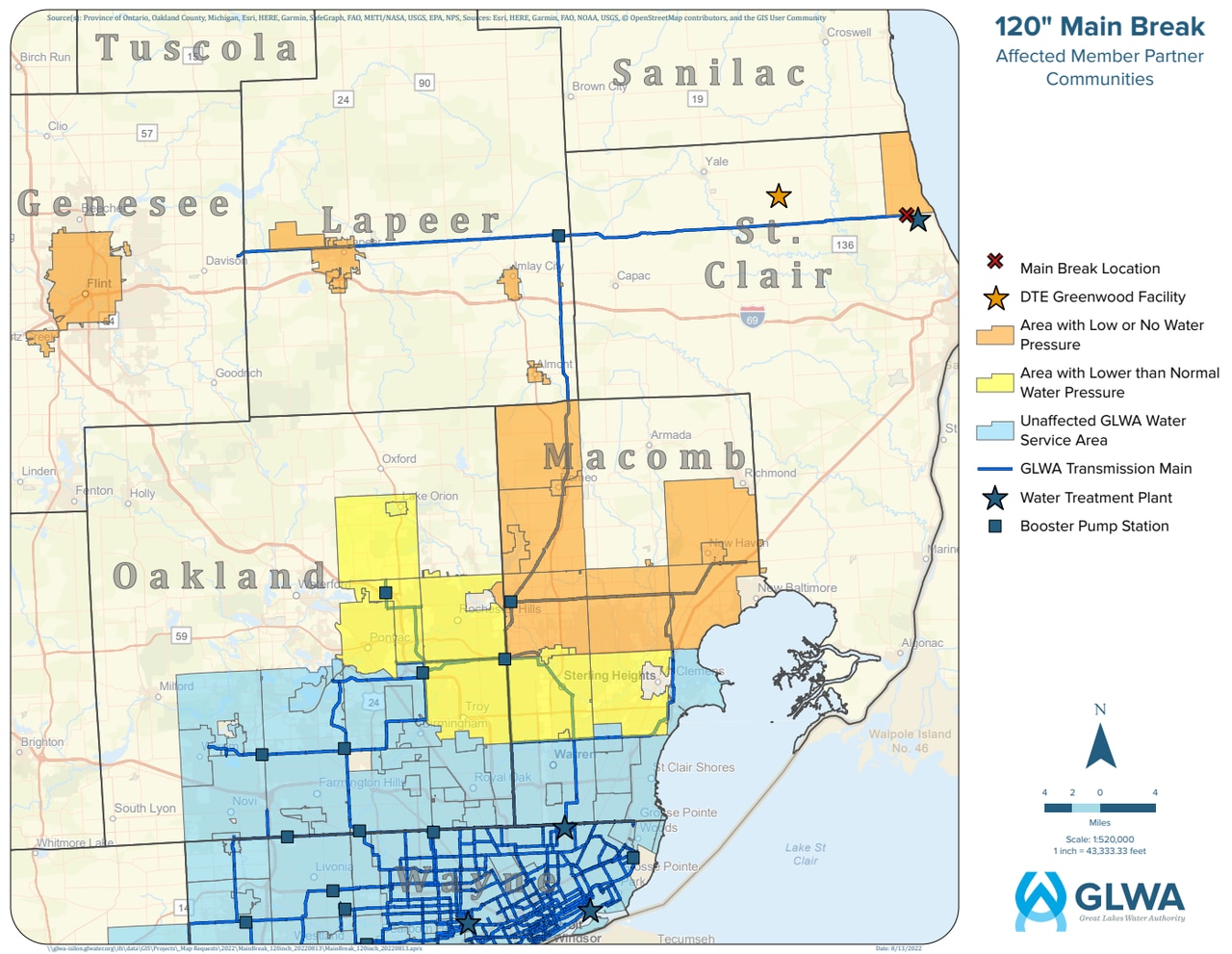 No boil water advisory for Flint due to secondary water source, officials say

FLINT, MI – The City of Flint and the Township of Flint have been removed from a list of 23 communities that the Great Lakes Water Authority (GLWA) issued a boil water advisory for Saturday morning due to a leak in the water pipe.

Flint now receives 100% of its water from the GCDC pipeline until further notice and water quality is unaffected by this change, officials said.

“With the completion of the GCDC lateral pipeline, our water quality is unaffected by the major GLWA outage this morning,” Flint Mayor Sheldon Neeley said in a city news release. of August 13, encouraging residents to watch. this video explaining Flint’s new water infrastructure.

“My administration has worked diligently over the past two years to ensure that Flint’s water system is protected against malfunctions like these that would otherwise affect water quality. I want to reassure residents that our city woke up this morning to clean water, with strong and carefully planned infrastructure.

GLWA said the leak, discovered early Saturday morning, was on a 120-inch water main in the regional water distribution system that distributes finished drinking water from the water treatment facility at the Lake Huron to communities in the northern portion of GLWA’s drinking water service area.

Due to the leak, GLWA asked Genesee County to provide an emergency supply of potable water from the GLWA system to several nearby communities. The organization is also in the process of starting the emergency water supply for the town of Lapeer and Mayville service area, officials said.

As it is currently unknown when GLWA will be able to resume normal operations, the GCDC is asking all residents of Genesee County to conserve water, as a purely precautionary measure.

Until the advisory is lifted, the GCDC is asking residents to consider limiting water-intensive activities such as watering lawns, using sprinkler systems, washing cars and buildings, flushing gutters or other non-essential activities, officials said.

The main line is the longest in the regional water supply network. Around 935,000 people were affected by the leak, GLWA initially said.

Due to changing water pressure levels, the advisory was issued out of an abundance of caution. Other residents cited in metropolitan Detroit communities should not drink the water without boiling it first, bringing all water to a boil for at least one minute, and then allowing it to cool before using.

Crews have identified the location of the leak, which is approximately one mile west of GLWA’s Lake Huron water treatment facility and are working to isolate the area around it so that repair work can begin. Once the leak is isolated, crews will begin opening emergency connections to other lines in the system to restore some flow to affected communities.

GLWA Water Quality will notify affected communities when the boil water advisory has been lifted. For more information, contact Great Lakes Water Authority Water Quality at [email protected] or by calling 313-926-8192 or 313-926-8128.

The festival celebrates the pride of Lansing