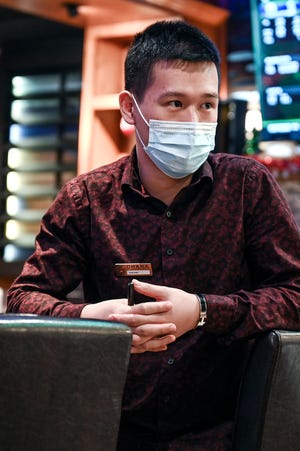 In the weeks following the opening of the doors to Ohana Sushi by David Yang, the dining room was buzzing with activity.

Yang, 21, opened the restaurant on Dec. 7 in a former Outback Steakhouse at 707 Brookside Drive in Delta Township. Son of restaurateurs, he started working on the property this summer.

To prepare her menu, Yang traveled to the east and west coasts, dining at sushi restaurants serving endless platters. He loved the model at will and wanted to bring it to the Grand Lansing.

“We were trying to come to the opening and it was packed,” said Rachel Henderson, who dined at the restaurant during a recent lunch rush. “We resisted, and then we thought, ‘Well, we’re home for lunch, so let’s try it for lunch. “And here we are.”

She and her partner Lexie Buccili made several sushi rolls, both trying dishes they had never eaten before.

“Sushi isn’t exactly cheap, especially when you eat a lot of it,” Buccili said. “So it was nice, and I had a wide variety of soups, salads. Everything was on the all you can eat menu.”

Ohana Sushi employees Wendy Hung and Anthony Wang said opening day was hectic but rewarding. Yang’s former classmates at the University of Pennsylvania, they joined the staff after Yang called for help. The understaffing has affected the restaurant, Yang said, causing some orders to be delayed in recent weeks.

Yang got his start in restaurants at a young age, helping his parents run their business. His family operates New China Buffet in Portland, Michigan and The Tangy Crab, a Cajun-inspired restaurant near Ohana Sushi. They hope to expand Ohana Sushi as a revenue-based chain from the Delta Township location.

Yang’s relatives helped him create the menu in Ohana, introducing him to mango rolls – a homemade special – and cream cheese rolls. All of the buns are made by a team of chefs who are posted within sight of the dining room so customers can watch them work.

Yang has always loved that sushi makes a complete meal: starch, protein, and vegetables in one roll. Growing up, many of his family meals were served with white rice. Sushi relieved him of having to grab bits of everything on his plate.

Yang also serves vegetarian and gluten-free options, as part of her mission to have something for everyone in Ohana.