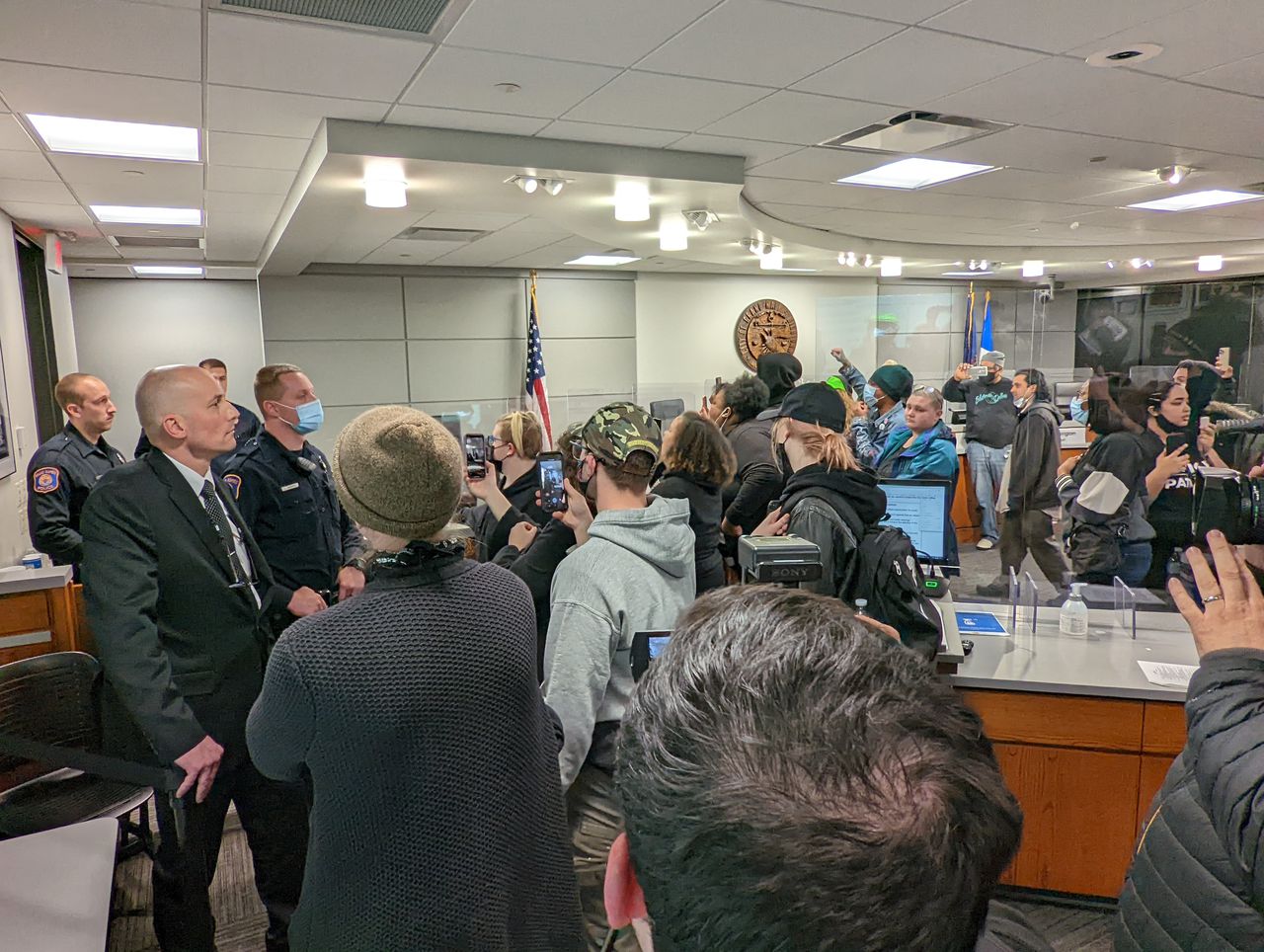 UPDATE: At 11 p.m., city officials told protesters that City Hall was closing and they should leave. The two dozen remaining protesters left without any arrests being made inside the building.

The disruption to the meeting occurred during public comments on Tuesday, April 26, when a person, after his microphone was cut off for swearing, approached Grand Rapids Police Chief Eric Winstrom , and began to interrogate him. At the same time, others started screaming.

Mayor Rosalynn Bliss tried to adjourn the meeting for 10 minutes, but as the commotion continued and many made their way to where the commissioners were seated, she adjourned the meeting.

The commissioners and most city employees left the city commission chambers about five to 10 minutes later, with Winstrom staying behind, listening to the protesters as they yelled at him. The leader was flanked by about three officers.

Over time, people stopped chanting and using megaphones and Winstrom was able to answer questions, but people largely voiced their concerns to him.

Winstrom listened and answered protesters’ questions until 11 p.m., when city officials said the building was closing and protesters should leave. Just over two dozen remaining protesters all left, with no arrests made inside City Hall.

Other demands included that all officers obtain their own liability insurance and that Kent County District Attorney Chris Becker recede from the decision to indict Schurr. Becker has yet to receive the Michigan State Police’s investigation into the police shooting.

The protest was one of many in the past three weeks after Lyoya, a 26-year-old black man, was shot on April 4 by a Grand Rapids police officer.

It was the first time protesters had ended a meeting and only the second meeting of the city commission since Lyoya’s death.

Lyoya was arrested on the morning of April 4 because his license plate did not match that of his vehicle.

Schurr initiated the traffic stop and then attempted to subdue Lyoya after Lyoya attempted to run and then struggled with the officer. The couple argued over control of Schurr’s Taser.

Eventually Schurr was on top of Lyoya and shot him once in the back of the neck.

After two years at home, travelers want an experience, not just a vacation

Michigan gubernatorial candidates ‘can’t read Trump’s mind’, but many believe he will support them