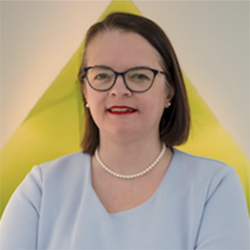 The Flint Institute of Arts (FIA), located in the Flint Cultural Center, has named Tracee J. Glab as its new executive director.

Glab, who has served as curator of FIA collections and exhibitions since 2009, took up his post in July. She succeeds John B. Henry, who announced his retirement this year.

“My tenure as curator at the FIA ​​has been the most rewarding part of my museum career, and I look forward to leading the museum into the next chapter,” says Glab. “With its stellar art collection and prestigious art school in the heart of the Flint Cultural Center, I am thrilled to build on the solid foundation of FIA and engage the public in the arts in new and innovative ways. .”

She has overseen over 100 exhibits and curated 40 exhibits, working with the community on exhibits such as Jerry Taliaferro’s “Women of a New Tribe” and “Sons: Seeing the Modern African American Male.”

She has worked extensively with contemporary artists, both local and international. Glab has also overseen 15 publications, contributing to the 50th anniversary book “Magnificence and Awe: Renaissance and Baroque Art in the Viola E. Bray Gallery”, among others.

Previously, she worked with current DIA director Salvador Salort-Pons, who recommended her for the position of curator at the FIA.

Glab was selected after the museum’s board conducted a nationwide search conducted by m/Oppenheim Executive Search, a search firm specializing in finding candidates for nonprofit executive positions. She becomes the fourteenth director of the FIA ​​and the first female executive director. Glab is the third woman to hold the top management position since Margaret Davis and Mary Brozik led the FIA ​​in the early 1930s.

“After meeting several talented candidates, we believe that Tracee’s knowledge of the FIA ​​and the community, as well as her role in the expansion of the museum and the collection as a curator, made her the ideal candidate. for the role of Executive Director,” said Thomas Lillie, Chairman of the FIA ​​Board of Directors. “The FIA ​​is a valuable asset to the community, and we believe Tracee’s vision and leadership will help expand membership, attract new visitors, and continue to grow the objects in the collection and the artists represented by these works.”